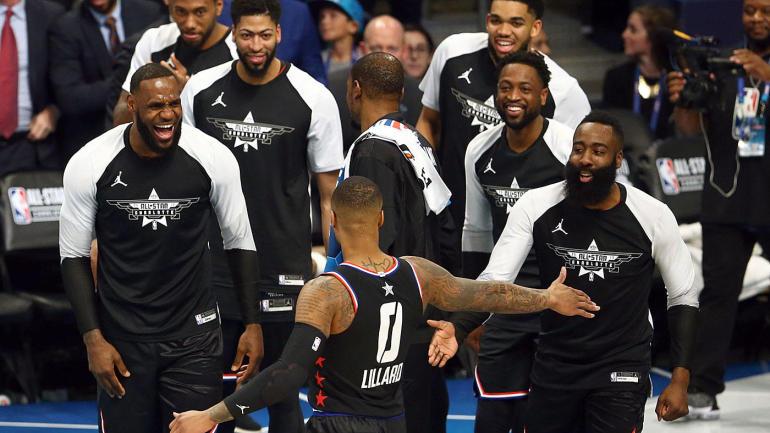 Future Legends. Made, Not Born.

Now that the dust has settled from the NBA All Star weekend, we at The Kickz Stand would take this time to recap from the intense weekend.

The weekend kicked off with the All Star Celebrity Game which saw the Home Celebrity take the win 82-80. The star-studded show was stolen by Famous Los, the viral comedian whose basketball videos are popular within and beyond NBA circles. He scored 22 points with three assists to lead the Home team over the Visiting team 82-80 and, of course, won the loyal crowd at Bojangles’ Coliseum. Famous Los was named the MVP for the Celebrity Game.

Philadelphia 76ers star Ben Simmons led the way for Team World with 28 points on 14-for-17 shooting and six assists. Dallas Mavericks rookie Luka Doncic added 13 points and nine assists in front of his teammate and All-Star Dirk Nowitzki, who served as honorary coach for Team World.

Next up we head over to the NBA “State Farm All-Star Saturday Night” which holds the Skills Challenge, 3-Point Shootout & the Slam Dunk Contest.

The Skills Challenge saw 8 of the hottest players run through a course to see who would hold the hottest skills. Round 1 saw Nikola Jokic (Nuggets) beat Nikola Vucevic (Magic), Jayson Tatum (Celtics) beat Mike Conley (Grizzlies), Trae Young (Hawks) beat De’Aaron Fox (Kings) & Luka Doncic (Mavericks) beat Kyle Kuzma (Lakers). The semi finals saw Tatum take out Jokic to setup a showdown with Trae Young who took out Doncic. Tatum ended up beating Young with an incredible half court shot to win it in style. See video below of how it all unfolded

The finals came down to the final shot by Curry to tie it with Harris but unfortunately he missed handing the 3-Point Champion to Brooklyn Nets Joe Harris. See video below of a recap

Diallo brought the house down with his second dunk of the first round, calling out and jumping over Hall of Fame TNT analyst and original Superman Shaquille O’Neal to net a perfect 50 from the judges. After clearing Shaq, Diallo stuck his elbow in the rim, a nod to dunk contest icon Vince Carter, and snatched open his Thunder jersey to show off the Superman shirt underneath.

Team Giannis took early control with a 53-37 first quarter, featuring a combined 28 points on 12-for-13 shooting from Bucks teammates Giannis Antetokounmpo and Khris Middleton. Team Giannis led by as many as 20 points, but Team LeBron made it a game with an 18-4 run, fueled by Damian Lillard and Bradley Beal, in the third quarter.

The teams traded leads early in the fourth and it was a three-point game with 4 1/2 minutes to go, but Team LeBron put it away with a 10-2 run featuring five straight points – a step-back 3-pointer over Joel Embiid and an alley-oop dunk from former teammate Kyrie Irving – from LeBron James.

Kia All-Star MVP Kevin Durant led Team LeBron with 31 points on 10-for-15 shooting, scoring 11 (on a perfect 4-for-4 shooting) in the fourth quarter. Nine other members of Team LeBron scored in double-figures.

While there was alot of highlights to report on, its best to check out the video below with some of the best!