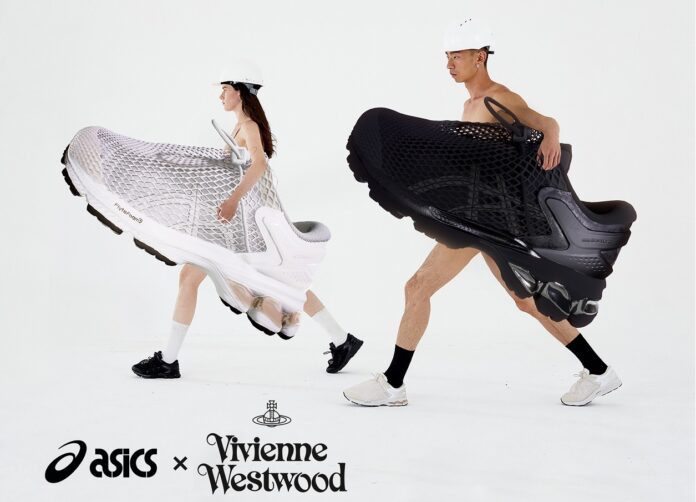 The renowned sports brand ASICS and the British legendary high-fashion brand Vivienne Westwood have teamed up again this year to launch new collaboration sneakers, ASICS x Vivienne Westwood GEL-KAYANO™ 26. Available in two colours, black and white, the collection will debut at the runway of Andreas Kronthaler for Vivienne Westwood Fall/Winter 2020.

Time-honoured and distinctive, both ASICS and Vivienne Westwood are brands drawing strength from superior quality, advanced technology and constant innovation in their respective professions. Sharing these traits, the two sides are deeply fascinated by each other’s design philosophy, which gives birth to this collaboration.

The new ASICS x Vivienne Westwood GEL-KAYANO™ 26 sneaker is inspired by the sack shoes first showed up in Vivienne Westwood‘s third Buffalo/Nostalgia of Mud/the Worlds End collection in 1982. This goes in line with the tribute paid by the first collaboration last year to the designer’s early creation years during the New Romantic (1981-1987).

Back in 1982, Vivienne Westwood’s creation went beyond the youthful and restless punk in England, and was expanded with a global vision. Inheriting the brand’s second Savage collection inspired by Native American clothing, the new season has drawn inspiration from exotic civilizations such as Jamaican Rastafari, Dominican Republic, Peru, New Guinea, and African tribes. Sack shoes are derived from a footwear style featuring a whole piece of leather to wrap feet, and are also associated to the way of cargo loading used in maritime trade during the W colonial period, echoing the brand’s Victorian world view at the time.

Nostalgia of Mud is not only the name of the season’s collection – the second store opened by Vivienne Westwood and her then partner Malcolm McLaren also bears that name. By creating an original soundtrack for the runway of the season and mingling the branded garments into his music video BUFFALO GALS, Malcolm McLaren also brought about a hit for a time – the Buffalo Gals style.

As a supporter of ASICS’s performance sports designs, Andreas Kronthaler, creative director of Vivienne Westwood, has specially selected the latest model in ASICS‘s professional running shoes series GEL-KAYANO™ – the GEL-KAYANO™ 26, as the base style for this year’s collaboration.

This also matches with the show that Andreas Kronthaler created for the Vivienne Westwood Fall/Winter 2020 collection. The signature Orb Saturn logo is embedded in the METACLUTCH™ external heel counter, a finishing touch in combination with heel reflective shields at rear. The modern and minimalist palette of black/black and birch/white adds more fashion vibes to the style.

ASICS x Vivienne Westwood GEL-KAYANO™ 26 are now available at ASICS.com, Above the Clouds and Up There Store.