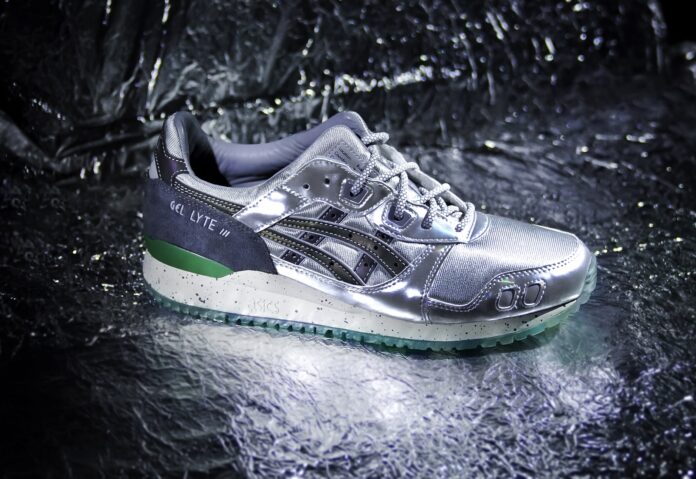 After the ASICS GEL-KAYANO 5 OG ‘Nasi Lemak’ in 2019, Malaysia streetwear store HUNDRED% and SneakerLAH, Malaysia’s biggest sneaker event joins forces once again with ASICS for another collaboration. This time around with ASICS most prominent silhouette, the GEL-LYTE III – currently celebrating the silhouette’s 30th anniversary.

Concept behind the collaboration pays homage to one of Malaysia’s most iconic landmark, the Petronas Twin Towers. The Petronas Twin Towers was the title holder for the tallest building in the world from 1998 till 2004 and is currently reigning as the tallest twin towers globally, which was fully completed and open to the public with the first batch of Petronas personnel moving into the building on the 1st of January 1997.

The colourway of the sneaker is designed as closely as possible to resemble the Twin Towers with an eye-catching metallic silver upper portraying the metallic aesthetics of the towers, subtle hints of green to symbolize the tint of the tower’s windows, a reflective iridescent stripe to represent the reflection of the tower’s windows during different times of the day, completed with a green translucent sole to mimic a visitor’s vision looking out or in from the tower’s windows.

A few other subtle details worth mentioning would be the OG mesh material on the uppers keeping the silhouette true to its original build from 1990, a patch on the tongue stating general facts related to the Petronas Twin Towers, speckles on the midsole to represent rain droplets on the windows of the Twin Towers during Malaysia’s rainy days and lastly, a debossed ‘LAH’ branding presents itself on the heel cup of the silhouette commemorating the pair as a true Malaysian collaboration.

The SneakerLAH x HUNDRED% x ASICS GEL-LYTE III ‘Kuala Lumpur Twin Towers’ will be released on sneakerlah.com via a raffle system which will be open for registration on the 3rd and 4th of December for Malaysian residents, while a global release will be on the 19th of December.