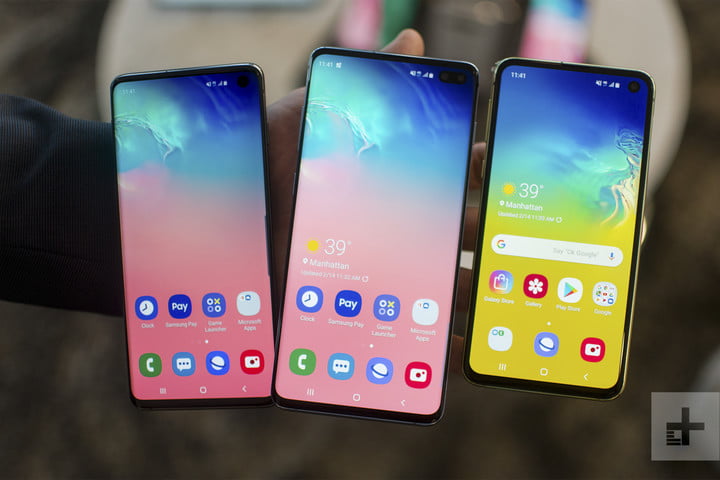 BABY-G and The Pokémon Company, announced a new addition coming to the BABY-G line of women’s shock-resistant watches, the BA-110PKC, featuring the...
Read more
Sports

Only feels like yesterday we had the 2019-20 season wrap up with the Los Angeles Lakers taking home the gold, and then...
Read more
Sneakers

LEGO and Adidas have launched yet another teaser of their upcoming collaboration – a ZX-8000 sneaker under Adidas’s new A-ZX project which...
Read more
Sneakers

“WHAT THE SWOOSH” x BespokeIND

BespokeIND have popped out a new colourful hand crafted silhouette. The "What the Swoosh" This has been a reoccuring...
Read more

What a day it is for the Android users. As one myself, it was good to see what Samsung had in store for its next generation of smartphones. And boy did they deliver. Samsung, this morning, unveiled 4 new Galaxy phones in its 10th year.

The Galaxy S10E starts as the baseline model for the new Galaxy lineup. It has a 5.8-inch Full HD+ AMOLED screen that’s flat rather than curved, but sports an otherwise similar design, complete with a punch-hole selfie camera. There are two rather than three cameras on the back though, namely a 16MP f/2.2 ultra-wide one and a 12MP variable aperture one – so it lacks the 12MP telephoto lens of its siblings. The Samsung Galaxy S10e also comes with 6GB or 8GB of RAM, up to 256GB of storage, a 3,100mAh battery and a fingerprint scanner that’s on the side rather than in the screen.

The Samsung Galaxy S10, Samsung’s newest flagship has a lot of impressive specs, from its 6.1-inch QHD+ Dynamic AMOLED curved screen, to its triple-lens rear camera, made up of a 16MP f/2.2 ultra-wide lens, a 12MP f/2.4 telephoto lens and a 12MP lens that can switch between f/1.5 and f/2.4 apertures. The Galaxy S10 also has a refreshed design, with a punch-hole in the screen for the 10MP front-facing camera. The world’s first ultrasonic fingerprint scanner is also built into the display, so bezels are kept to a minimum. The Galaxy S10 is powerful too of course, with a top-end chipset, 8GB of RAM and up to 512GB of storage, while a 3,400mAh battery keeps it running.

Alongside the Galaxy S10, Samsung has also announced the larger Galaxy S10 Plus. This has a curved 6.4-inch QHD+ AMOLED screen, but the screen size isn’t the only difference. This phone also has a second camera on the front, with an 8MP snapper joining the 10MP one. Its battery is a lot bigger too, coming in at 4,100mAh, and you can get it with up to 12GB of RAM and 1TB of storage. The need to add in a second front-facing camera has led to a slightly different design, with more of a pill shaped cut-out in the screen, but otherwise the Galaxy S10 Plus has the same look and specs as the standard model.

This is the most premium of the Samsung Galaxy S10 models and, as you’ve probably guessed from the name, it supports 5G. That aside, other highlights of the Galaxy S10 5G include an enormous 6.7-inch screen, a 4,500mAh battery and four rear cameras, consisting of the same three as the main S10 range. On top of that there’s also a 3D depth-sensing camera, useful for augmented and virtual reality, as well as facial recognition.

Probably the biggest talking point to come out of this event was the Samsung Galaxy Fold. It kicked off the show and it’s likely to be the biggest takeaway most people had coming out of the event. Samsung’s folding smartphone is here, and it’s a beauty. Samsung’s foldable smartphone uses an innovative new hinge system to open and close like a book, seamlessly switching between the outer 4.6-inch screen and the inner 7.3-inch tablet-like screen.

But though the folding tech is impressive, the Galaxy Fold dazzles inside, too. It comes with an unnamed 7nm processor, an astounding 12GB of RAM, and 512GB of onboard storage. Two batteries mean a battery capacity of 4,380mAh, and you can be sure the huge screen will be a huge power draw. That huge display can be put to good use and you’ll be able to use three apps in the split-screen mode for the first time. There are three camera lenses on the back, joined by two on the front, and another single lens on the cover, too — making six lenses. The Samsung Galaxy Fold will come in LTE and 5G versions and it will launch on April 26.